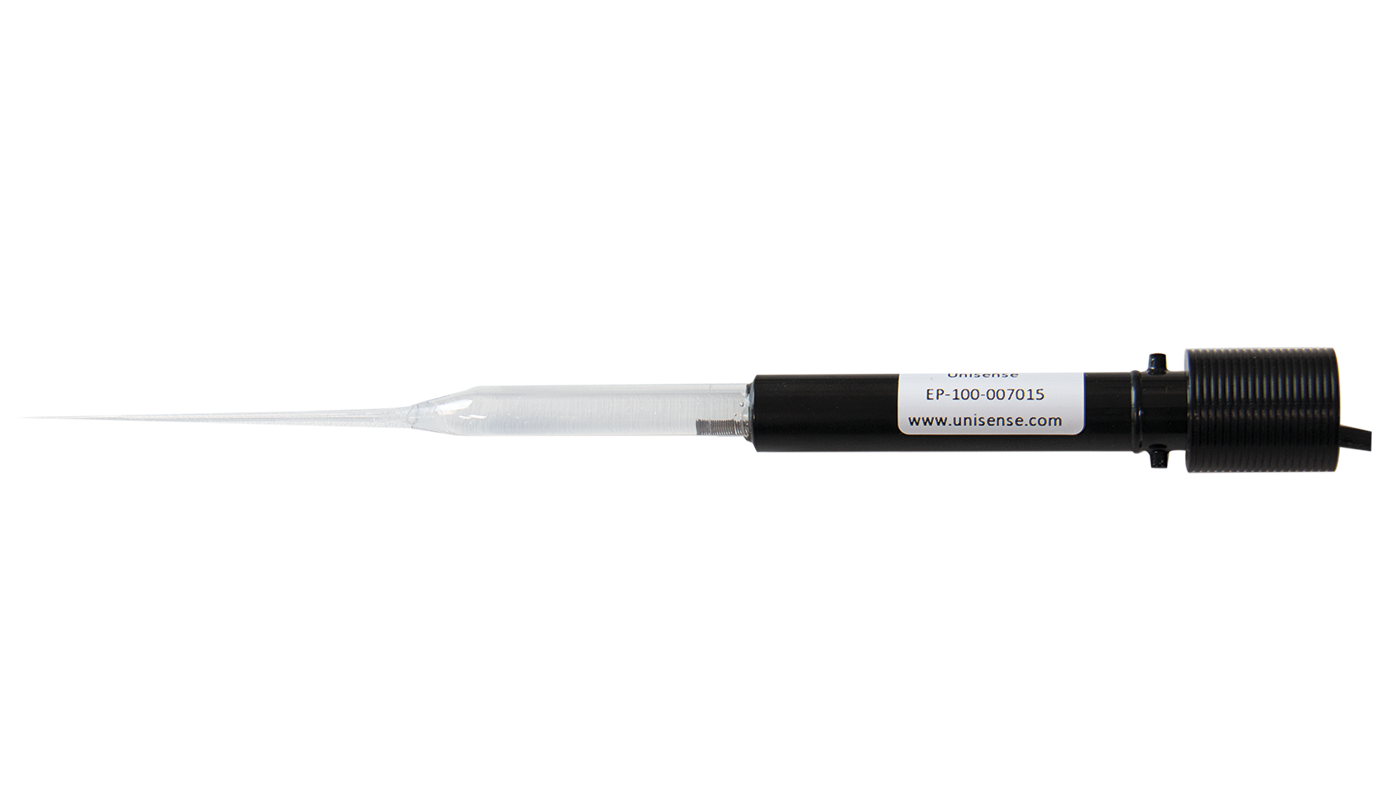 The Electrical Potential Microelectrode with a tip size of 100 µM 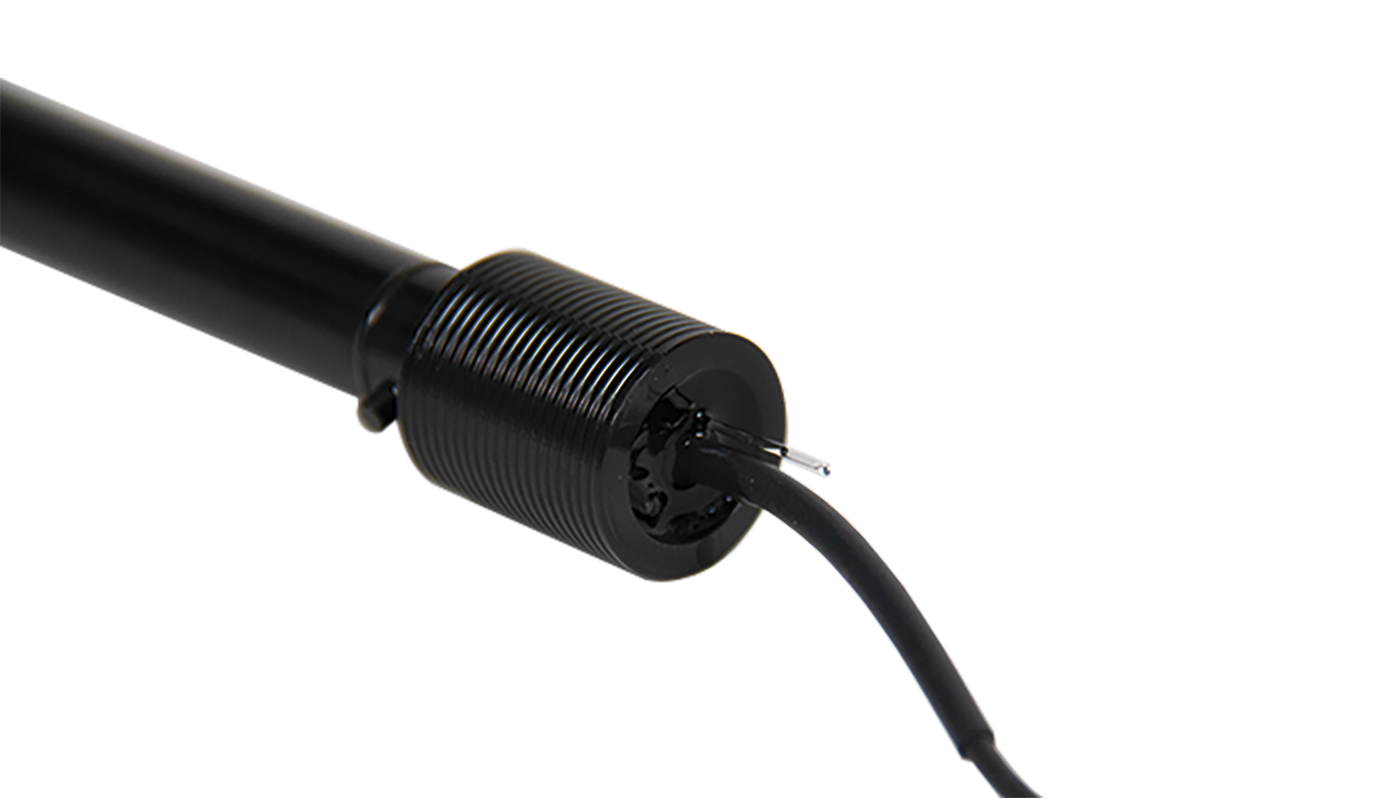 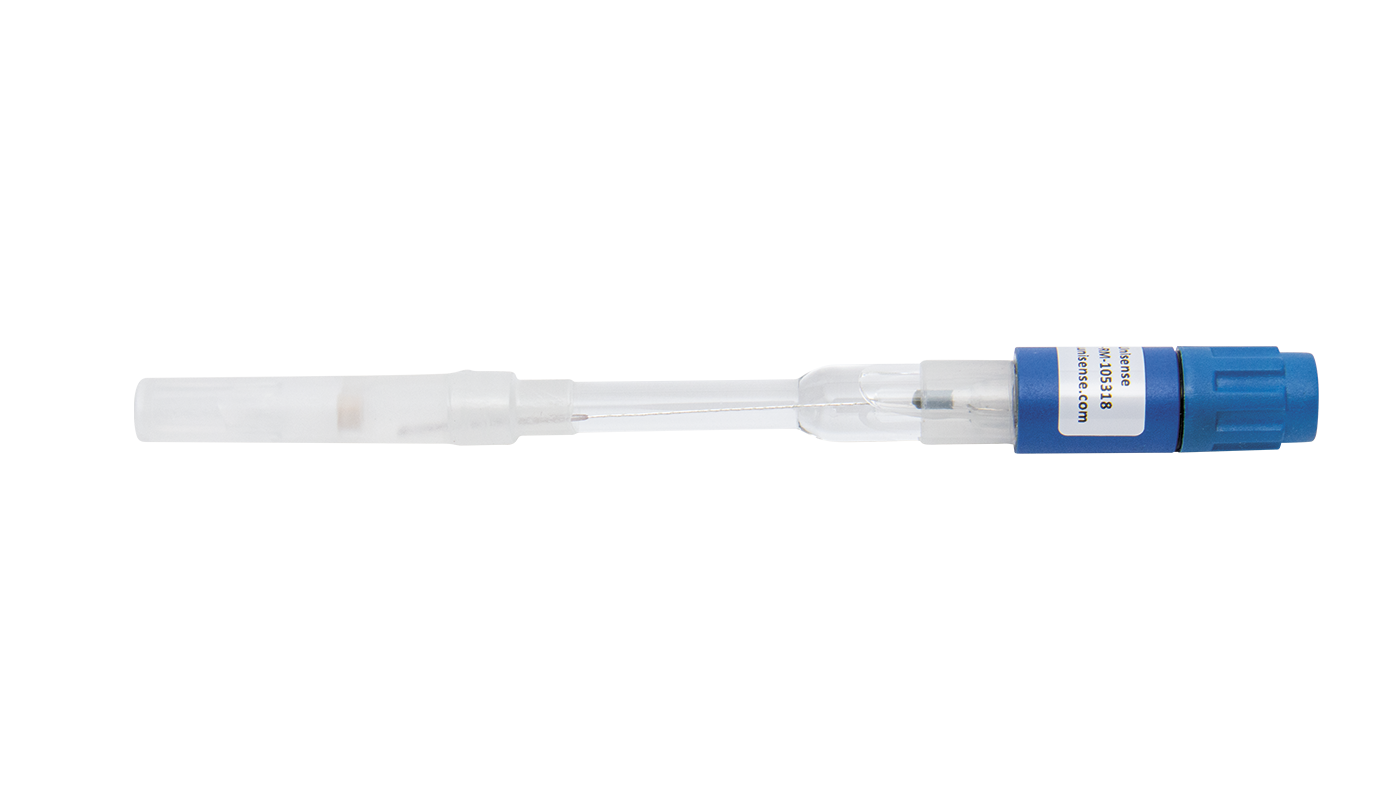 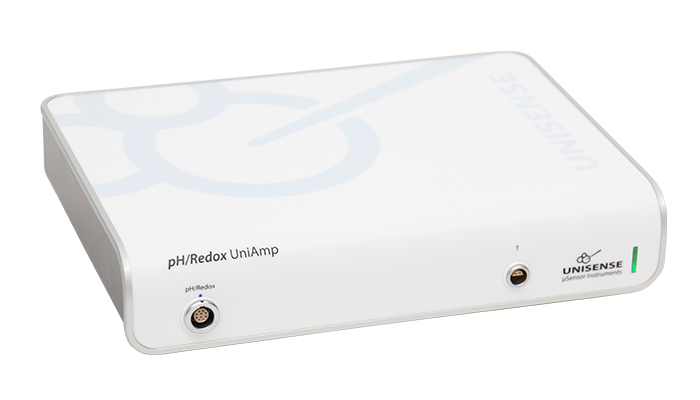 The EP Microelectrode signal must be amplified by a Unisense amplifier e.g. the pH/Redox UniAmp
Designed for research applications within:
Biogeochemistry
Microbiology
Chemistry

With the Electric Potential Microelectrode, you can measure gradients in electric potential with very high spatial resolution thanks to the fast response and a tip diameter of 100 µm. Read more...

The signal is shielded very effectively against electrical noise, making it possible to resolve differences in electric potential of a fraction of a mV. The microelectrode may be used at salinities between freshwater and full ocean seawater. 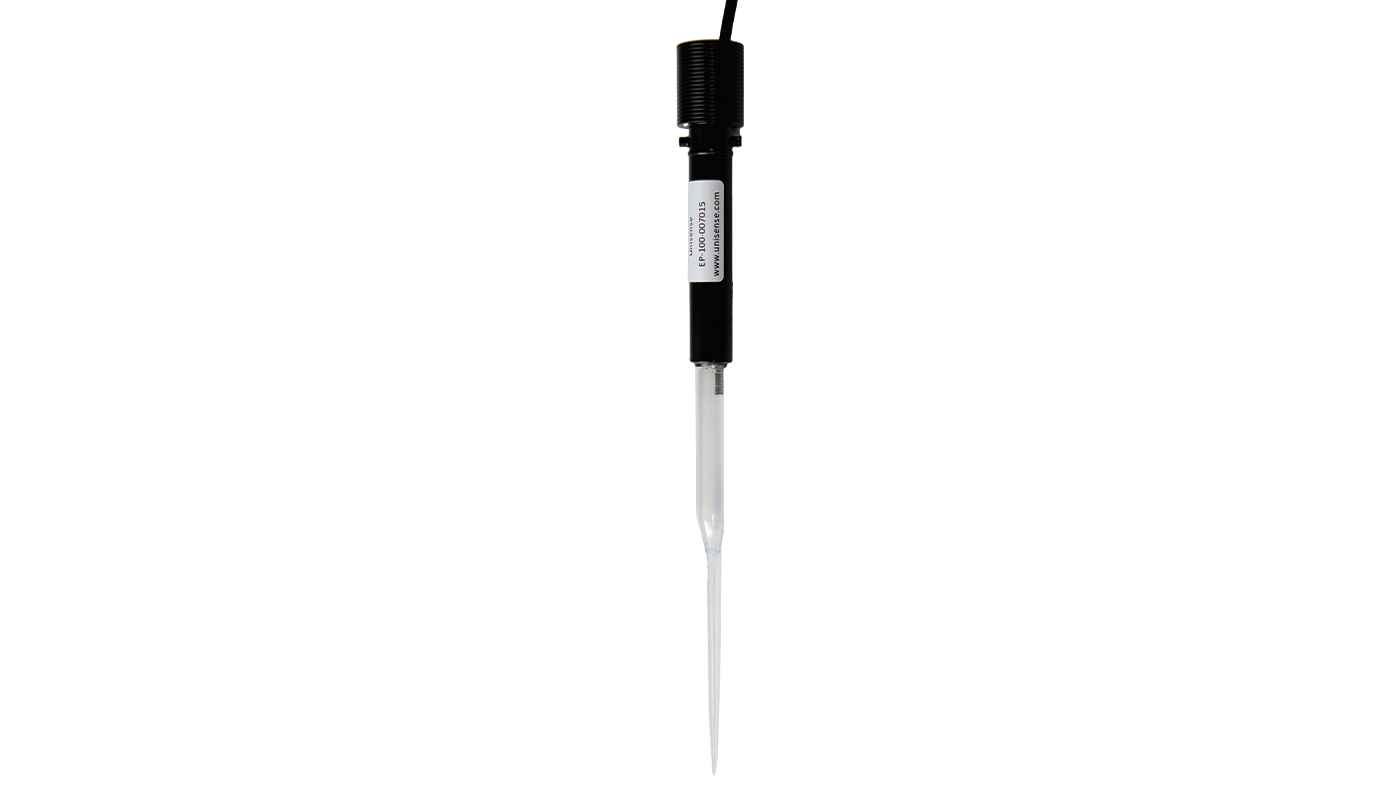 *When mounted with in situ mini connectors, the shaft has no protection mounted, but fits directly into the in situ sensor mounts with pressure compensation. In situ sensors have a standard length of 130-160 mm. 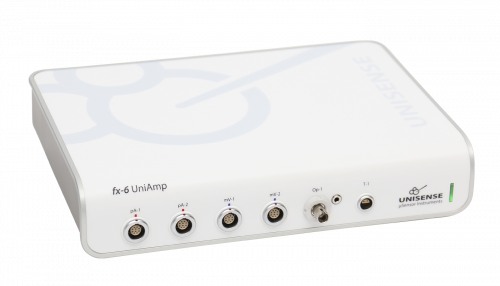 Amplifier portfolio for all Unisense sensors and electrodes including optical sensors 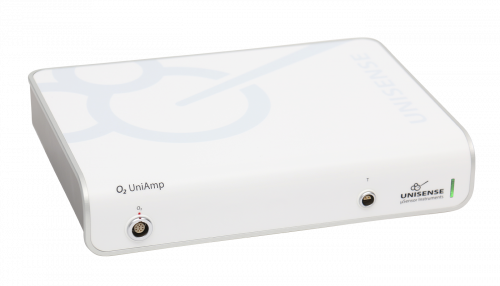 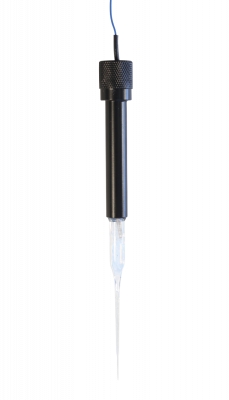 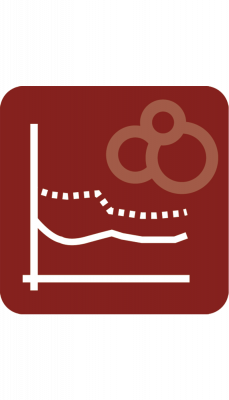 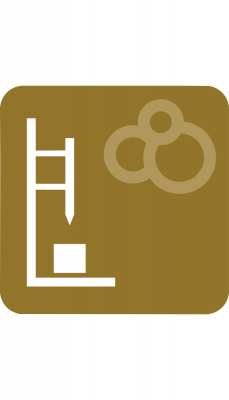 See all publications
Electric potential microelectrode for studies of electrobiogeophysics
Damgaard, Lars Riis et al. (2014), Journal of Geophysical Research: Biogeosciences, vol. 119, 1906-1917
Damgaard, Lars Riis, Risgaard-Petersen, Nils, Nielsen, Lars Peter (2014), Journal of Geophysical Research: Biogeosciences, vol. 119, 1906-1917
Spatially separated electron donors and acceptors in sediment can be exploited by the so-called “cable bacteria.” Electric potential microelectrodes (EPMs) were constructed to measure the electric fields that should appear when cable bacteria conduct electrons over centimeter distances. The EPMs were needle-shaped, shielded Ag/AgCl half-cells that were rendered insensitive to redox-active species in the environment. Tip diameters of 40 to 100 µm and signal resolution of approximately 10 μV were achieved. A test in marine sediments with active cable bacteria showed an electric potential increase by approximately 2 mV from the sediment-water interface to a depth of approximately 20 mm, in accordance with the location and direction of the electric currents estimated from oxygen, pH, and H2S microprofiles. The EPM also captured emergence and decay of electric diffusion potentials in the upper millimeters of artificial sediment in response to changes in ion concentrations in the overlying water. The results suggest that the EPM can be used to track electric current sources and sinks with submillimeter resolution in microbial, biogeochemical, and geophysical studies.
10.1002/2014JG002665
Read more
Mapping electron sources and sinks in a marine biogeobattery
Risgaard-Petersen, Nils et al. (2014), Journal of Geophysical Research G: Biogeosciences, vol. 119, 1475-1486
Risgaard-Petersen, Nils, Damgaard, Lars Riis, Revil, André, Nielsen, Lars Peter (2014), Journal of Geophysical Research G: Biogeosciences, vol. 119, 1475-1486
Filamentous, multicellular bacteria of the Desulfobulbaceae family form a biogeobattery in marine sediments by mediating an electric coupling between sulfide oxidation in deeper anoxic layers and oxygen reduction at the sediment surface. The electric fields generated in such biogeobatteries were determined with microelectrodes and correlated well with geochemical indicators of microbial electrogenic activity in the top 2 cm of the sediment. The electric fields collapsed within less than a minute when oxygen was removed and reestablished when oxygen was reintroduced, demonstrating a direct coupling between aerobic microbial activity and presence of electric fields. Modeling of the electric potential distribution was used to quantify and localize electron sources and sinks. Most anodic oxidation was confined to the lower part of the anoxic zone with nondetectable free sulfide, suggesting that iron sulfide was the main sulfide source and had already been depleted in the upper part of the anoxic zone. The flow of electrons from anoxic sediment layers fuelled up to 80% of the aerobic activity of the sediment. Responses of the electric field to the presence and absence of nitrate, nitrite, or nitrous oxide in the overlying water readily demonstrated potentials for cathodic reduction of nitrite or nitric oxide and possibly nitrate but not nitrous oxide.
10.1002/2014JG002673
Read more